I left my house before Thanksgiving, and just got back home on Sunday. It was a wild ride full of ups and downs...

November 29 - Chicago - Hamburger Mary's
I love playing here, and this was my fifth show at Mary's Attic, the adorable cabaret venue above Hamburger Mary's. I was afraid that on the Holiday weekend (the Saturday after Thanksgiving) I wouldn't be able to draw a crowd. But we ended up packing the place. Dan Telfer, a brilliant Chicago comedian, founder of Chicago Underground Comedy (CHUC), hosted the show. And my favorite lady in Chi-town, Miss Cameron Esposito opened. So much fun. I made a few other comedy stops in Chicago, performing at CHUC, Bryan Babylon's show on Vocolo radio (broadcast from the Chicago Public Radio studios), and the most fun, laid-back, freewheeling comedy show in Chicago, "Entertaining Julia," hosted by the one and only Puterbaugh Sisters.

December 2 - Heathrow Airport - DEPORTED!
Things took a turn for the depressing when I was detained and deported from the UK. I played the Edinburgh Fringe Festival in the UK in August, playing a show everyday for a month. No permit was required, so went I traveled to the UK to visit a boy and booked three little shows over a period of two weeks, I didn't think I needed a permit. I was wrong. Dead wrong. When the surly UK border agent started grilling me about my intention to play shows, I realized it was not cool. But it was too late at this point to effectively lie. I got the boy on the phone to plead my case, but they were not sympathetic. They gave me a 48-hour pass, so I did get to see the boy briefly, before they deported me back to NYC. I had sublet my apartment, so I found myself in the situation of being deported AND homeless. I spent the night at Keith and Chemda's house, sharing my deportation story on their show, then flew to Chicago. I spent the next two weeks, laying low at my sister's house. It was nice to be around family coming off such an epic failure. And Alice put me to work at her store. She needed the help, and it was nice to feel useful. :-( 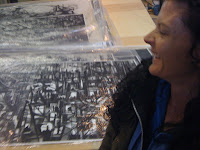 December 17 - Austin, Texas - Ruta Maya
I mostly travel when I want to visit friends, and I have some great friends in Austin, Meg and Eric. They live way out in the woods outside of Austin, and they have huge studio space nearby. Meg is selling her drawings in galleries around the world, and Eric just invented a new drum called the Black Swan. My show in Austin was at a cool 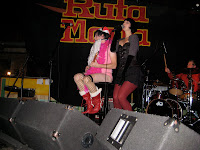 venue called the Ruta Maya. Great room, and I was lucky enough to open up for a S&M-theater-rock, Weimar-inspired 6-piece band called Mistress Stephanie & Her Melodic Cat along with ukulele-playing showstopper, Luna Tart. Luna's act reminded me of one of my favorites: Madeleine Kahn's character in Blazing Saddles.

Houston - Dec. 18 - Notsuoh, Dec. 23 - Super Happy Fun Land
Sometimes I get treated to performing in the most odd venues. Notsuoh is a little bar with a stage, owned and operated by Jim Pirtle, a painter and former performance artist. Notsuoh has a lot of history in downtown Houston. It was a shoe store (hence the thousands 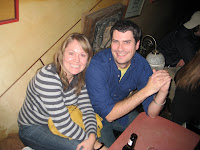 of shoe boxes stacked up in the joint), a dance club, a coffe shop, and now a crazy bar full of crazy, artsy people. Jim told me that he once performed a performance art piece where he ate a jar of mayonnaise on stage, vomited it up, and put a cherry on top with "Close to You" by the Carpenters playing in the background. Clearly a statement on consumerism and the undercurrent malaise in America. Or something. Sounded pretty horrible and amazing. I also met Kelly and Kara in Houston, and they are awesome. When I came back through Houston to play at Super Happy Fun Land, I was gonna just stay at a hotel. But Kara and Kelly offered to put m 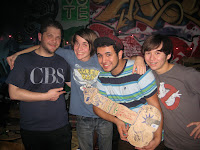 e up at their house for the night. Was really awesome. They're good peeps, Kara's a graphic designer with her own company, and Kelly is a structural engineer for a ship manufacturing company. Shit like that makes me want to go back to Houston, just to hang with them again. At one point during the night, the burglar alarm malfunctioned and a blaring siren went off for about a half hour before they got it to stop. They apologized profusely, but it was kind of funny watching them run furiously up and down the four-story house trying to restore order. At Super Happy Fun Land, I met punk band, The Pelly Rogers. These teenagers had me sign a giant wooden penis and proceeded to play a set of aggressive punk anthems that shook my old bones to the core. Took me back to when I was just a little 20-something trolling punk shows in New York, running into Joan Jett who was trolling for young punk girls. Super Happy Fun Land is a crazy venue on the edge of industrial wasteland Houston. They were serving some sort of Hobo Stew that looked really delicious, garnished with Fritos. Yummo! 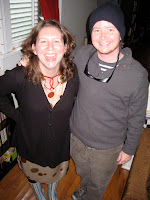 This might have been the best show I've ever had. Great audience, great venue, great MONEY!!! Le Chat Noir is a beautiful cabaret theater. I arrived in New Orleans on Saturday and Jessica Halem and Red, my hosts had a little football party. The Saints were playing, and were crushed, but that didn't stop us from heading out dancing after. Jessica and Red were going to host me at their house, but their next-door neighbors were out of town and needed someone to watch their cats. So I had a beautiful one-bedroom apartment to myself. Lucky. I went out every night in New Orleans and had an amazing time. The day before my show, 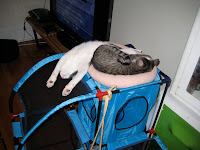 I called Tulane University's radio station and ended up doing a live, in-studio performance on Miss Behavior's catch-all show. Le Chat Noir is an amazing place, home to a bunch of great shows. If you visit New Orleans, be sure to stop in for a show there. Jessica Halem is such a pleasure to know. Sometimes, the universe aligns itself just right and you end up making new friends that you're gonna know forever. In this case, Marga Gomez made the match. I'm so grateful to Marga but not just for this...
Posted by itsrainingben at 11:39 AM