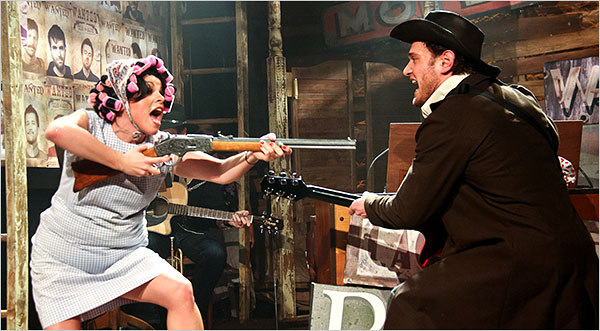 A friend is coming to town and asked me for a theater recommendation. I recommended Bloodsong of Love, a delightfully twisted, blood-soaked parody of a spaghetti western with a catchy, memorable inventory of great country-rock songs. When I googled it to find a link to send my friend, I was shocked at the bad reviews I found in Variety and the New York Times.

By being way smarter than most people, Christopher Isherwood has lodged a huge stick up his ass and missed the point entirely. Isherwood has seen too many shows, and now he can no longer distinguish between good ones and bad ones. His review of Bloodsong is overly analytical and way too short on praise. Here is a show filled with great music, great performances and great joy. Maybe the show "simply soldiers on without acknowledging its contradictions, mixing a mostly straight-up country-rock score with goofball comedy willy-nilly." Who gives a shit, Isherwood? It's like I was watching a different show. The show I saw reveled in its own contradictions. It's a post-modern, self-referential, joyful explosion of song that delighted in manipulating every cliché in the book.

I'm a little outraged. And for the record, I don't know any of the people involved in the production, save the artistic director of the theater. I have absolutely nothing invested in the success of this production. I walked in with no expectations, and I walked out thoroughly entertained. I'm still singing the melodies.

This is a purely original work that will get a fraction of the attention showered on commercial Broadway adaptations like Legally Blonde, Xanadu, etc. Why does Isherwood feel the need to shit on the first musical of an indie artist? Is he dead inside? How was he unable to reflect the joy of this show in his review?

Isherwood's review is misleading. He's using his influence to lead people away from this independent show and directly to bullshit like the huge dump that Twila Tharp took on Frank Sinatra's music at the Marriott Marquis. People will automatically go to shows like that, regardless of the reviews. (A friend gave me a ticket.)

Are there flaws in the show? Yes. Is it perfect? No. Is it incredibly entertaining? Yes. Is it exciting to see someone's brilliant work at the beginning of their career? Mos def. Go see it before it closes on May 9. I'm going to see it again. I need to hear some of those great songs again. You will not get to see a better show such an intimate space. It's fantastic. Isherwood needs to lighten up.
Posted by itsrainingben at 8:15 AM