My friend Stanley will march for me... Stanley Cup, that is 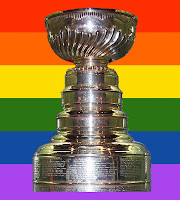 I won't be in Chicago on Sunday to watch the parade. I'm headed to Cleveland to do a show. And I'm not big on parades anyway. However, this year, Chicago sports outlets are doing their part to end gay locker room panic, and I find it inspiring.

The Chicago Cubs are sending a float down Halstead & Broadway, with baseball icon Ernie Banks waving to gay fans. But the current sports star of Chicago is the Stanley Cup. Hawks defenceman, Brent Sopel will be at the parade with his wife and kids, waving at gay hockey fans as well as other gay people who wonder why the fuck this family has a giant punch bowl with no margaritas in it. Sopel says he's marching to honor the memory of out hockey manager, Brendan Burke, who died in a car accident in February, two years after coming out to his dad, Toronto Maple Leafs manager, Brian Burke. Two days ago, however, the Hawks traded Sopel to the Atlanta Thrashers. Still, he'll be representing straight Chicago, and in a sense all professional sports in saying, "No big deal if you check our packages in the locker room." :-)
Posted by itsrainingben at 6:35 AM