The flyer for my show features a picture of me naked with a ukulele in front of my genitals and the quote "Tiny instrument, big balls... So damn funny!" Does this seem like the kind of show you want to attend with the whole family?

Last night a family (parents, teens, cousins, grandma) came to my show and sat right up front. They had no idea what lay in store and it was pretty clear from the beginning that this was going to be horrible. I tried to save it. I talked to them and confronted the elephant in the parlor head on. The elephant squashed me with one good step. I am no match for the power of family discomfort during songs about sex. Ugh. I powered through my set, talking a lot more than usual and performing about half of my set list. The best thing I can say about my show last night is that it ended.

I should say that for me it was terrible. And for the family it was terrible. But the other people who atteneded, the whole thing was amusing. And they dug a little deeper into their pockets when they saw how hard I was working to please the impossible customer. The tips were bigger from a smaller crowd than I've had the last several nights. Anyway, onward ho! 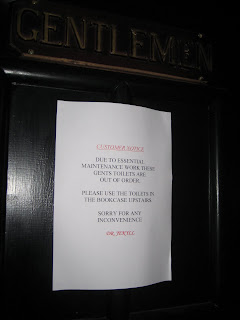 The streets in the non-touristy parts of the city (where my venue is) were dead, so I felt lucky to have an audience at all (about 20 people came) on a cold Monday after the first busy weekend of the Festival. In fact Jessica Delfino saw I was a little low and invited me to open her show. She also had a smaller audience than usual, and I realize that it makes me a bad person... but it made me feel a little better about myself. I did a couple of songs at the top and introduced Jessica and then watched her show, fell in love with her all over again. She's just such a charming motherfucker. 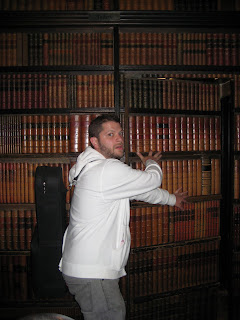 Jessica's playing at a venue called Jeckyll & Hyde, and they have a weird Victorian dungeon/crypt theme. Last night there was a sign on the bathroom door, redirecting gents to use the toilets upstairs in the bookshelves. What? Yep that's what it said. So I went upstairs to find a bookshelf, but the only bookshelf I saw was a solid floor to ceiling shelf of books. I pushed a little on the bookshelf and it moved a little. I kept waiting for Teri Garr's voice to tell me to "Put zee kendle beck!" But therein were the toilets, and all was well...

Tonight I'm playing two shows. One at Renroc, and one at the other establishment the Ross family owns, The Earl of Marchmont, in the cool Marchmont neighborhood.
Posted by itsrainingben at 3:00 AM