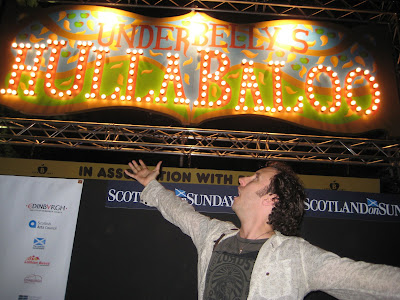 Sleep is for the weak. I am weak. I require 7 to 8 hours daily. Sadly, there is no rest for the wicked. Not wanting to mix pills and booze (this is the traditional showbiz suicide cocktail), I found myself a little turbo charged from a couple of pints at 2 AM. Fell asleep at 5. Woke up at 8:30 to the banging on pipes from the construction site next door. And the border collie. They have a little call and response system going. The construction workers bang on a pipe, and the border collie barks then yelps. Then another bang and the cycle repeats. There will be a nap today before my first show at 7:30 PM.

Last night, Delfino and I played a couple of songs each at a variety show. It was fun; people loved my songs. But it was like a million degrees in the room, so people were sort of wilting after a bit. There was a reporter for the BBC who strongly resembled Professor Treelawney (Emma Thompson's character from the Harry Potter films) with what appeared to be a bird sitting on some twigs in her mess of natural, long curls. While I was on stage I had a direct view of her, and she appeared to be dying, but I spoke to her after the show, and she was indeed alive.

Then Delfino, Mike, and went to a big outdoor party (that ostensibly happens nightly) called "Hullabaloo." I predict we will be spending a LOT of time there. It was filled with 20- and 30-somethings drinking pint after pint. A couple of boys approached who'd been at the show. They liked our songs and they were funny and charming and they bought us drinks. We got a late night kebab with them at the one place remains open late.
Posted by itsrainingben at 2:08 AM