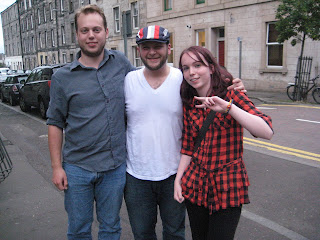 Rhiannon Returns
Last night I had another full house. I think there was a reviewer there, too, so I'll be keeping me eyes posted for a review. She was taking notes. And laughing a lot. I'm still not taking anything for granted. I'll be flyering every day. Rhiannon came back for a third show. (That's 3 of 4.) And this time I got photographic evidence of how cute she is. 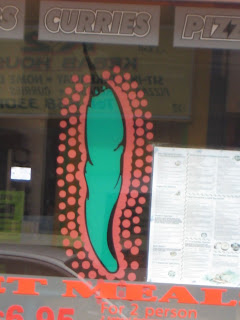 There is a curry house called "The Chili Connection" that has a giant chili on their window. But this chili is inexplicably ringed in red dots and it appears to be vagina. If someone told you, "Take this chili, and make it look as much like a vagina as possible!" this is what you would do with it. It is striking and disturbing, and I am going to have to eat there eventually as I pass it every single day.

Jamie Kilstein
I'm not much of a political comedy fan (apart from the Stewart/Colbert hour), but I caught Jamie Kilstein's show (Assembly Rooms, Edinburgh, 9 PM, through 30 August) to watch this guy do his thing. The Brits love him. He's as left wing and liberal as possible. He might have tried homosexuality at some point in his life, only to more authentically champion the gay rights movement. It's rare that I find myself to the right of a poitical discourse, but if you are to the left of Jamie Kilstein, you probably have fallen off the political spectrum entirely, into a bronze foundry, and are now a statue in a "Worker's Square" somewhere. Jamie is a great performer, engaging and exciting to watch. Oh, and funny. My favorite bits though were not the "important" political stuff. I loved the family bits, how his brother tricks him into looking at old man porn, how he accused his father of being a terrible, unloving father and then being shocked to realize that he was a terrible teen. 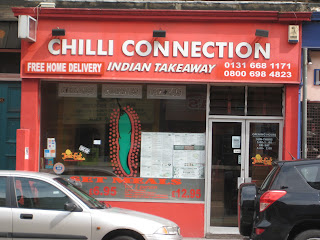 Posted by itsrainingben at 2:47 AM